free shipping on us orders $90+

Too many shooters don’t think about their hearing health until it’s too late. While some of us have already learned the hard way, some tactical shooters (and a good portion of hunters) still put their hearing at risk every time they shoot. But what exactly happens when shooters compromise their safety for the perfect shot? And how at-risk are you for developing some type of hearing loss? Let’s take a look.

Imagine you fired a shot without hearing protection. If you shoot, let’s say a 9mm, you’ll experience a 160 decibel blast and probably some pain or ringing in your ears. You may also experience some hearing loss after shooting; however, this might only be temporary. Temporary Noise Induced Hearing Loss is often caused by loud, impact noises like gunfire, fireworks, or anything that causes a “bang”1. If you’re wondering how long it takes for hearing to come back after shooting, with TNIHL you’re in luck. TNIHL subsides within 16 hours to a few days and hearing often returns to normal level2. To speed the gunshot hearing loss recovery period, rest your ears3. Avoid loud sounds as best you can, which means wearing proper hearing protection and listening to entertainment at or below 85 dB If or when 100% of your hearing returns, research shows4 that permanent damage may have already occurred. Taking proper precautions to protect your hearing in the future will be vital.

After too much wear and tear on your ears, it’s easy to succumb to Long-Term Noise Induced Hearing Loss. LTNIHL is permanent and irreversible, often requiring expensive hearing aids to overcome. When it comes to LTNIHL, you may not notice the damage you’re doing until it’s too late. 24% of adults will report having “excellent hearing”, when in fact their hearing is already reduced and damaged5. For those who handle firearms, the risk of permanent hearing loss is even greater. So much so, audiologists coined a term for it.

Shooter’s Ear is a term used for a unique kind of hearing loss. Shooters will often develop hearing loss on their non-dominant side (the left ear for right handed shooters and the right ear for left handed shooters). This is caused by head shadow, when the tilt of a shooter's head against the stock actually protects their ear on their dominant side from any gun blast6. They also tend to suffer from high-frequency hearing loss, which means sounds like “s”, “th”, and “v” can be difficult to hear and understand7. 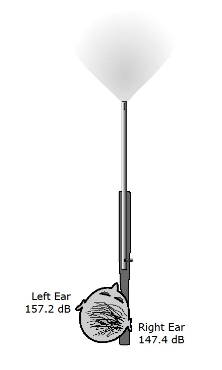 Shooters can also easily develop tinnitus, a temporary or permanent ringing sensation that appears without any actual sound present. Tinnitus can also sound like buzzing, humming, or whooshing. It’s caused by a variety of reasons, but hearing loss due to bent or broken ear hair cells is common with shooters. These hair cells are responsible for sending electrical signals from the ears to the brain, and damage to these cells can cause nerve signals to fire on accident, thus causing a phantom ringing or buzzing sound8.

If you notice ear ringing after shooting, you’re experiencing tinnitus. This indicates that you likely needed greater hearing protection, and should take steps to conserve your hearing in the future- both on and off the range. You’re also probably wondering how to get your ears to stop ringing after shooting, and the answer isn’t exactly clear. Reduce the sound around you and protect yourself from loud noises; this will help you feel better and will protect you from further damage. As for other home remedies, we’ve seen recommendations for everything, from over-the-counter medication to limiting alcohol and caffeine. Regardless, we recommend scheduling an appointment with your primary care physician or an audiologist to create a personalized treatment plan.

If your ear feels clogged after shooting, do not panic. You most likely did not rupture your eardrum, rather your ear(s) sustained temporary noise induced hearing loss and should return to normal within a few hours to a few days.

Hearing damage from shooting isn’t inevitable, but it will happen without the use of proper hearing protection and precaution. The costs of hearing aids, doctor’s visits, and your quality of life certainly outweigh the price of a high-quality hearing protector. Don’t take your hearing health lightly. Don’t wait until it’s too late.